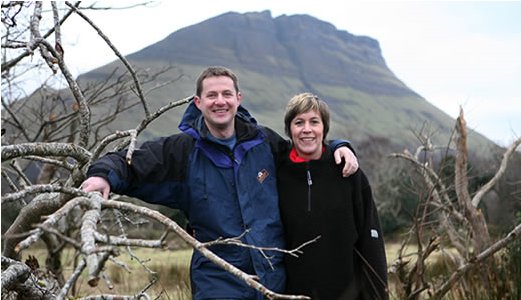 When we first bought our house in Ballintrillick, County Sligo, under the Benwiskin mountain, we dreamt of the possibility of building an office and working from home.

The article that follows was as a result of an interview we gave to Harry Keaney from The Sligo Champion about our plans back in 2008 when we purchased a boggy field – some would say in the middle of nowhere!

By Harry Keaney
Reprinted with permission of The Sligo Champion, Jan 2009

With recession and unemployment worsening, and the age-old spectre of Irish emigration now looming again, one couple bucking the unfortunately emerging trend is Jonathan and Lisa Lomax.

Having come to Ireland with their two young children from England last March to set up home in Jonathan’s native North Sligo, they are now busily engaged in two major projects, planning their new environmentally-friendly house that they hope to see nestled on a tree-sheltered site at the foot of Benwiskin as well as developing and expanding their web site business, Format.ie, which designs and builds web sites and applications.

All going well, it is a perfect example of modern technology not only being an integral part of rural living but, in the case of Jonathan and Lisa, making it possible . . . hopefully.

It’s also a scenario, with all its trials and tribulations that many emigrants who returned to live in Ireland during the booming Celtic Tiger period will empathise with.

Jonathan, son of boat-builder, Rodney Lomax and Trudy Lomax from Mullaghmore, was out of Ireland for 17 years, almost all of which he spent working in London.

He had left home for France when he was 19, hoping to join the Foreign Legion, a unique unit within the French Army, but within a few weeks he was dispelled of that idea.

Instead, he found work in a restaurant in Mayfair, in London, and began learning about computers, going on to make a career in computer training with multinational conglomerate Unilever for which he worked for six years. He also worked for Universal Music and as a freelance IT trainer before embarking on his own web site business from Camden Town, in London.

On the Tube one day, he met Lisa, from Kent, a graduate from Oxford Brookes University who holds a degree in French, German and Business Studies. She has worked for INSEAD, in France, one of the world’s leading business schools, as well as working in London for ITV, and for financial, commercial and legal organizations, concentrating mainly on public relations and business development.

However, the idea of returning to Ireland, while perhaps not a certainty, had always lurked in Jonathan’s mind.

“I always missed Sligo. I remember saying to Lisa when we first met that I wanted to return to Ireland,” he recalled.

In 2000, they were married in Muninane Church.

Said Lisa: “I grew up in Kent and my parents moved to Shropshire when I was 18, so I never found an allegiance to any part of England, and I was very happy to come here to get married.”

For Jonathan, living in London always felt “very transient.” They had spent more than two years looking for a suitable house in Ireland from their home in North London. Most of the houses they viewed were oil-fired and poorly insulated. In addition, Jonathan and Lisa always knew they would like to build their own house.

It was the arrival of their children, Ben, who is 4, and Katie, 2, which finally settled the matter.

“Once the children came along, it all changed,” said Jonathan. “Ben was approaching school age and we knew, if we were to move back to Ireland, it was now or never. We also had a house to sell and we knew things were about to take a turn.”

Katie’s health was also an important consideration, with Jonathan and Lisa of the opinion the clean air of North Sligo would help her battle recurring chest infections.

Now, Ben is one of 17 junior and senior infants in a class in the same national school in Cliffoney that his father attended. Had the family remained in London, Ben would have been in a class of at least 30. And like many returning couples, they found themselves getting to know many new people through their children, their school and other activities.

Although the family currently live in Cliffoney, they hope that, eventually, home will be in Hollyfield, beneath Benwiskin.

“It’s part of this area that I love,” said Jonathan. “I used to come up here picking holly, walking the dog, and as a teenager, I used to cycle up there and run.”

It will be an environmentally friendly house, they say, using insulation, passive heat from the sun and a geo-thermal mat.

“It’s going to be north/south facing, so hopefully the sun will provide heat, with the majority of heat coming from the geo-thermal mat,” Jonathan explained.

Designed by conservation consultant Wendy Lyons, it is intended to blend into the surrounding countryside. According to Lisa, there are 110 trees on the site. “We had to do a survey of it to show we had adequate cover not to block views of the mountain,” she explained.

Their web site business, Format.ie, is aimed to bring what they feel is their innovative ideas and 13-years of experience gained abroad to the business community in County Sligo and its environs.

Explained Jonathan: “The way the market is, a lot of businesses are tightening their belts and looking at new ways to attract footfall or business. There is a huge market for web sites that are built correctly. A lot of web sites out there are very poorly coded and not doing much for their businesses.”

As for what are the frustrating things that has struck Lisa since coming to live here, one thing immediately jumped to her mind: ‘the lack of speed with which people come back to you.’

“Unlike London, where the work culture for me was far more aggressive and sales driven, and where I was expected to respond to emails within seconds, here, we are adapting to a slower yet friendlier work environment,” she said.